Get the Nth Working Day of the Month

I recently needed to schedule a task with Windows Task Scheduler to run at midday on the 5th weekday (Mon-Fri) of every month in 2020. Windows Task Scheduler lacks the functionality to configure such a schedule, so I needed to create a separate trigger for each month. Rather than do this by hand, I wrote a function in PowerShell to calculate the Nth weekday of a given month and year.

The function I wrote can be found here.

If an Nth value is specified in combination with a month and year which cannot be satisfied then a terminating error is thrown, EG:

Depending on the use case, this may be acceptable. However, if used as part of a process which is expected to run every month then the caller would need to be written defensively to handle this situation and take some form of remedial action.

The other caveat is that it doesn’t take into consideration public holidays. Again, whether this is a concern or not is dependant on the use case.

I suppose this is why Windows Task Scheduler doesn’t provide the functionality to configure such a schedule.

Demonstration: My Use Case

Due to the caveats mentioned above, I’m not entirely sure how wise it is to use this function as part of an unattended process where the expectation is that it is guaranteed to run once a month. With that said, you may now be wondering what practical use this function has, so allow me to explain my use case…

As mentioned in the summary, I needed to schedule a task using Windows Task Scheduler to run on the 5th weekday (Mon-Fri) of every month in 2020. I started by using my function to produce a list of dates. Obtaining the 5th working day of each month where a working week consists of the days Mon-Fri is not an outlandish requirement, so I didn’t expect any errors to be returned but best to be safe…

Once satisfied there was nothing awry with the list of dates, my plan was to populate a scheduled task with a series of twelve date/time type triggers, one for each month. In my case, the scheduled task already existed, I just needed to replace the existing triggers with new date/times for 2020. I opted to do the following:

An alternative (and in hindsight simpler) approach would have been to use PowerShell’s New-ScheduledTaskTrigger cmdlet to replace the existing triggers with twelve new triggers:

Finally, to ensure that the scheduled task had been correctly populated with the triggers, I used the following:

Working on this task lead me to dabble with various scheduling tools and specifications to find out how they handled different conditions. These are just some of my notes pertaining to this research.

In my function Get-NthWorkingDayOfMonth I took the decision to throw a terminating error if an Nth value is specified in combination with a month and year which cannot be satisfied. I was curious to see how this problem is handled by the iCalendar specification.

The Outlook 2016 UI prevents a user from scheduling a recurrent event on a specific Nth weekday (Mon-Fri) of every month beyond the fourth: 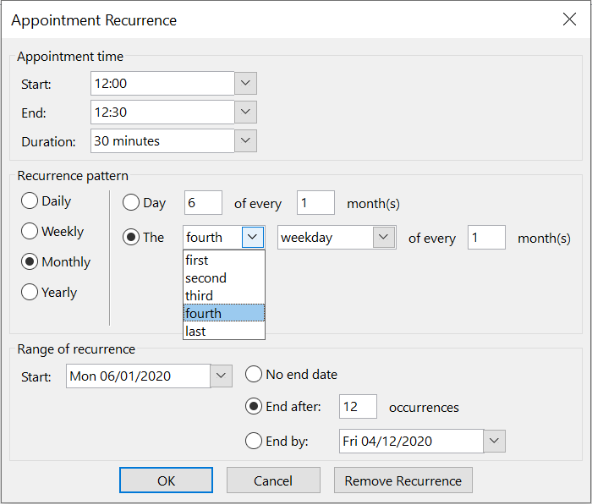 I wondered if you could circumvent this limitation by scheduling a recurrent event on the 4th weekday of every month, saving it to an iCalendar file (.ics), editing the file in a text editor, replacing BYSETPOS=4 with BYSETPOS=5 and importing the file. The answer is no, you can’t. When attempting to import the file nothing happens, there’s no error message. I also tried by constructing a minimal iCalendar file (opposed to the one produced by Outlook), this also failed to import.

All comments are held for moderation.
Your email address will not be published. Required fields are marked *